Tired of only being able to access your WhatsApp conversations on your phone? Start using WhatsApp Web.

WhatsApp has finally rolled out what most of you may have been waiting for a long time – WhatApp has launched a desktop client service called WhatsApp Web. WhatsApp Web can be used by scanning a QR code with your phone to log in. WhatsApp Web mirrors the conversations and messages from your mobile device so your messages will still live on your phone.

Earlier this week Facebook-owned WhatsApp announced WhatsApp Web. The new service makes it possible for a user to link a website accessible only through Google’s Chrome browser to his or her WhatsApp account. In doing so, WhatsApp conversations will sync between the mobile device and desktop.

Our step-by-step tutorial here will guide you through the process of bringing WhatsApp to your Web browser. Before you start the process, make sure you have the latest version of WhatsApp installed on your phone. 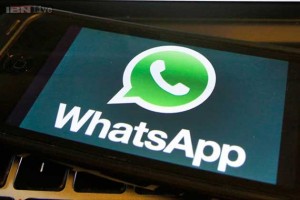 iOS users will notice directions to connect your iPhone are missing from the list of supported devices. WhatsApp says the reason is due to “Apple platform limitations.”

The layout of WhatsApp Web should mirror the mobile experience, just on a larger scale. You can still send emoji, photos, voice notes, view your contact list and so forth.

To receive alerts of incoming messages on your computer, click on Allow (top-right corner of Chrome) when prompted. You’ll need to approve access to other aspects of your computer in a similar fashion as you attempt to send photos or record voice memos.

WhatsApp was created by Brian Acton and Jan Koum in 2009. The two of them left Yahoo! in 2007 and applied for jobs at Facebook, but failed during the interview process. In February 2013, WhatsApp hit 200 million active users. One year later, Facebook announced that they acquired WhatsApp for $19 billion — which is the largest purchase of a company backed by venture capitalists. Facebook CEO Mark Zuckerberg said that the acquisition of WhatsApp was connected to his vision for Internet.org, an initiative to develop basic Internet services for developing countries around the world. Now WhatsApp has over 700 million active users sending over 30 billion messages per day. In the product development pipeline, WhatsApp also has plans to launch a voice-calling service.